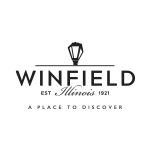 The Village of Winfield's speed trailer may be found stationed as various locations throughout the Village. It is used by the Police Department to advise drivers of the speed they are traveling in an effort to gain voluntary speed limit compliance.

The Winfield Police Department offers cable-style gun locks to residents at no charge. This program is supported by Project Child Safe and is funded through a grant from the Department of Justice.